What’s it Like to Be in a Focus Group?

If you were to describe a focus group to someone without context, it might sound a little like an odd dream. “I was in a room with a group of 7 or 8 strangers and we were talking about, pie? And then we all got paid?” As strange as it sounds, this is the situation in which I found myself on a recent Monday night. And while your initial response might be, “You’re dreaming,” I’m here to tell you that it’s true, you can get paid to talk about pie (or any number of topics) with a few friendly strangers and a moderator, all in the name of market research.

Before I begin, full disclosure. The focus group in which I participated was a mock focus group, meaning it was for educational purposes only. Point being, it was exactly the same as a real focus group, except for the fact that I didn’t get paid. But, if you do participate in any of the real Observation Baltimore focus groups, you will, most assuredly, get paid.

I arrived at Observation Baltimore, filled out a short form, and awaited the start of my focus group. After a few minutes, my fellow participants and I were invited into a room which looked a lot like a small conference room. We sat around a large square table while the moderator took her seat up front. After we all briefly introduced ourselves, the moderator informed us as to the order of the day: pies. Specifically, mini, portable pies. Pies on the go. Snack pack pies. This would be what we would talk about for the length of the focus group.

One thing before I continue. We recruit participants for our Baltimore focus groups based on the market research that the client wants to engage in. Basically, this means that you won’t just show up and be surprised with the topic of pies. You’ll probably have at least a general idea of the topic at hand before the focus group starts.

Moving on. During the focus group, the moderator guided a discussion about what we would like to see in a new mini pie, designed to be consumed on the go. What are your thoughts on crust consistency? Filling flavor? Filling consistency? Shape? Size? Color? Microwavable? And, (one of the most contentious topics) crust to filling ratio?

Who would have thought that so much could be said about mini pies? The conversation would start with a prompt from the moderator, and branch off from there. For example, she first asked what type of filling flavor we would all prefer. This evolved into a discussion of filling consistency preferences, and from there we moved to crust to filling ratio. Once the conversation got going, it flowed fairly naturally, and we covered a lot of ground in the realm of mini pies. If there was ever a lull or if the discussion began to venture off course, the moderator would step in with another prompt to start a new discussion about some facet of mini pies. After the focus group ended, let’s just say I was pretty hungry for a mini pie. 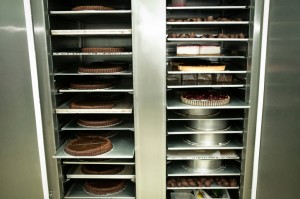 Or a regular pie.

Overall, my experience in an Observation Baltimore focus group was very enjoyable. The novelty alone made for an interesting experience, and an engaging discussion made it all the better. You too can get paid to participate in one of our market research focus groups. It’s literally as easy as pie.

Observation Baltimore pays CASH to individuals who participate in our qualitative studies at our Baltimore research facility. If you want to take part in one of these studies, please: