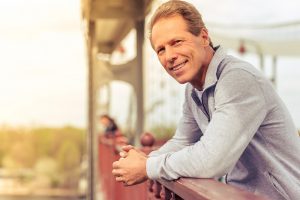 According to our survey, the average middle-aged man in the Baltimore Metro Area is educated, active, and interesting!

The middle-aged male population of the Baltimore Metropolitan Area can serve as an insightful audience for market research. In our 2017 survey of Baltimore males aged 41 to 65, we found that many are educated, active, and have a wide range of hobbies.

While eighty-seven percent (87%) of middle-aged men, surveyed by Observation Baltimore, are active in the workforce, they still find time to participate in a variety of hobbies and  outdoor activities. This may be due to the fact that sixty-one percent (61%) no longer have children living at home. Having an empty nest means more time to spend with a spouse or engaging in personal hobbies.

Hobbies reported skew towards outdoor and physical activities. Our survey found the most popular hobbies to be recreational sports, with a forty-seven percent (47%) participation rate, followed by hiking and cycling at forty percent (40%), fishing and camping at thirty-six percent (36%), and golfing at thirty-one percent (31%). Other less physically active hobbies reported include playing video games at thirty percent (30%), followed by playing a musical instrument at fourteen percent (14%), and home brewing beer at seven percent (7%).

Many of the middle-aged men surveyed who live in the Baltimore Metropolitan Area report contributing to household chores on a regular basis. The vast majority of men in Baltimore–between seventy percent (70%) and eighty-six percent (86%)–regularly perform household tasks, like vacuuming, cooking, and washing dirty laundry.

So while Baltimore men do not mind getting their hands dirty when it comes to keeping up with household chores many of them may treat those very same hands to a manicure as a reward for their hard work. When it comes to pampering themselves, a surprising number of middle-aged Baltimore men have experienced the relaxation of a trip to the spa. Forty-three percent (43%) have had a manicure. Other indulgences reported include pedicures at thirty-three percent (33%), followed by facials at twenty-one percent (21%) and body hair removal at nine percent (9%).

At Observation Baltimore, we understand that the success of your research is directly tied to the quality of your participants. Recognized as one of the top Maryland market research facilities and rated “One of the World’s Best” by Impulse Survey, we believe that Experienced Recruiting Makes the Difference. Our experienced recruiting is the foundation of our mission, as well as courteous and proactive hospitality and client services. Just six minutes from BWI airport and AMTRAK, our Baltimore research facility has a great location. Most importantly, we understand market research!