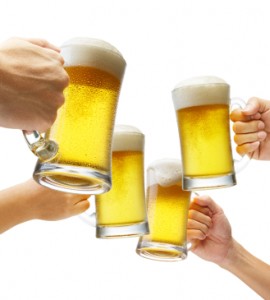 This past weekend marked the initiation of the 179th Oktoberfest in Munich, Germany, where deandls in dirndls (girls in traditional Bavarian dress) and bier abound.

Evolved from an event that took place in 1810 when the Bavarian Crown Prince Ludwig married the Princess Therese von Sachsen-Hildurghausen, the first “Oktoberfest” took place over a period of five days, concluding with a horse race.

By the end of the 19th century, the celebrations continued and eventually the festival was lengthened and pushed forward into September to allow participants to take advantage of warmer weather and late-night carousing. This part of the tradition has carried on through to the present day, with the festival beginning each year at the end of September and extending into the beginning of October.

In 1881, with the permission of the city council, the festival expanded to include beer sales. Before 1900, the famed beer tents were set up to host visitors, and opening processions initiated to mark the start of the festival.

Though Oktoberfest is seeded in tradition, it nevertheless makes alterations to its formula from time to time to stay relevant and keep visitors safe and contented. Here are some of the changes you can expect to see in 2012:

If you can’t hop a plane to Germany any time soon, never fear: beer enthusiasts can get a taste of the tradition at home with some of the area’s local Oktoberfest traditions. Below, Observation Baltimore has compiled a short list of some of the places to frequent in the Maryland and Washington, DC metropolitan communities:

To learn more, please contact Barbara Gassaway and the market research specialists at Observation Baltimore today by calling 410-332-0400 or click here! And if you are interested in participating in a future focus group, sign up at https://observationbaltimore.com/get-paid-baltimore-maryland-get-paid-cash-opinion-baltimore-md/.