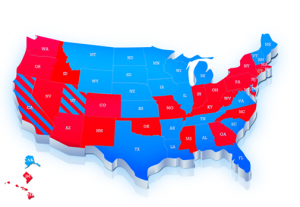 There’s certainly no shortage of candidates in the mix for the 2016 Presidential Election—some announced, some soon to announce, some still on the fence, and all emphasizing different principal issues as part of their campaign platform. With so many politicians and public figures recently announcing their candidacy, Observation Baltimore decided now would be an apt time to conduct research, polling early opinions regarding the upcoming 2016 Presidential Election. The results are in and Baltimoreans have spoken; here is a look at how they feel right now.

See you at the polls

Of the 500 residents surveyed 95% plan to make it to the polls and cast their vote for President on Election Day, 4% are undecided and 1% say; “No,” they do not plan to vote in the Election.

We asked respondents, “What is the one most important issue that will affect your vote in the upcoming election?” Economy was the most important issue to 30% of respondents, followed by Health Care 15%, and National Security 15%.  Responses selected less often include Education 6%, Foreign Policy 5%, and Corporate Tax Reform 3%.  A list of primary issues was provided.

75% of those surveyed say they will be tuning in to watch the televised Presidential Debates and hear candidates address the aforementioned issues.

Respondent were asked, “If today was polling day for the 2016 Presidential Election who would you cast your vote for?” The results are in and Democratic candidate Hillary Clinton came out on top with 42% of respondents voting for her to be the next President of the United States. Bernie Sanders trailed behind Hillary with 12% of the vote followed by Ben Carson 8%, Jeb Bush 7%, Donald Trump 5%, and Martin O’Malley 3%.

A lot could change between now and Election Day. Expect to see more research on the 2016 Presidential Election conducted by Observation Baltimore.