The Preakness Stakes return to Baltimore for its 139th running this Saturday, May 17th at Pimlico Race Course in northwest Baltimore. While the race is a longstanding Baltimore tradition
, the Preakness is also no stranger to change and innovation. Additions such as Infieldfest as well as the introduction of the Black-Eyed Susan drink show an event that’s not afraid to break tradition to try something new. The Preakness’ willingness to evolve has seen it through three different centuries and too many exciting races to count.

As the second spot in the coveted Triple Crown, the Preakness gets plenty of attention. This year, California Chrome is looking to continue his Triple Crown aspirations after a win at the Kentucky Derby. He faces competition from several contenders including Bayern, trained by the legendary Bob Baffert, who has trained five Preakness winners. General a Rod is expected to test Chrome’s mettle if he draws a post position on the inside rail. Ria Antonia, a filly with little buzz, drew some more after news that she would be jockeyed by Calvin Borel, who took a filly to the top spot at the Preakness in 2009.

The introduction of Infieldfest in 2009 was met with disapproval by those who enjoyed the more raucous scene of the pre-race infield. Infield imbibers protested, but Infieldfest has continued, and in recent years attendance has shot up as it has drawn larger and larger names. This year, Lorde, pop’s latest sensation, will be performing, along with hip-hop artist Nas and rockers Switchfoot.

In an effort to introduce a drink with the stature of the Kentucky Derby’s Mint Julep to the Preakness, the Black-Eyed Susan was created in 1973. The citrusy drink was met with amusement at best and derision at worst, but over the years it has undergone a transformation, and has also been adopted and reworked by many local drinking establishments.

“A long-standing Preakness tradition is to drape a blanket of Black-Eyed Susans across the shoulders of the winning horse. The 18 x 90 inch blanket takes three people two full days to create. First they attach a layer of greenery to a perforated spongy rubber base. Then they string more than 80 bunches of Viking daises together on flocked wire and interweave them into holes in the matte. The ends of the wire are snipped closely and the whole back of the blanket is covered with thick felt. Because Black-Eyed Susans do not bloom until June in Maryland, the centers of the daises are daubed with black lacquer to recreate the correct appearance. The blanket is then sprayed with water and refrigerated until it is presented to the winner on Preakness day.” 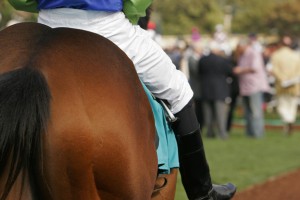 Needs some money for the bets you’re going to place on the Preakness Stakes? Observation Baltimore pays CASH to individuals who participate in our qualitative studies at our Baltimore research facility. If you want to take part in one of these studies, please:

Categories: All About Baltimore and Uncategorized | Tags: Baltimore and Preakness
This entry was posted on Thursday, May 15th, 2014 at 6:02 pm. Both comments and pings are currently closed.