The Preakness is quickly approaching! We recently conducted market research in the Baltimore area on the historic race. To see the findings, please read on. 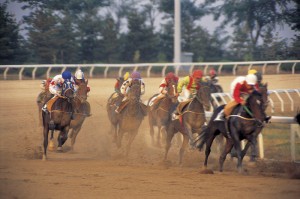 The Preakness is almost here!

The Preakness is reported by 70% of the respondents as the most interesting race to follow in the Triple Crown.

Despite the popularity of Uber in Baltimore City, 72% prefer driving themselves or carpooling as their mode of transportation.

Born and Raised in Baltimore Emerge

Of the 631 respondents who report having been born and raised in Baltimore or a surrounding county, 74% report the Preakness being the Triple Crown race they are most interested in following (78%).

The infield entertainment and festivities (38%) are the most enjoyed aspect of the Preakness followed by watching the races (23%) and people watching (19%).

Too crowded (56%), the infield atmosphere (31%), and too expensive (24%) emerge as the three reasons why Baltimore natives have never been to Preakness.

The infield entertainment and festivities (28%), followed by people watching (23%) and watching the races (22%), emerge as the most enjoyed Preakness activities.

Those who have spent their adult lives in Baltimore report the heavy crowds (47%), high expense (40%), and the infield atmosphere (31%) as to why they have not been to the Preakness.

Do Not Consider Self as a Baltimore Native

Of the 285 respondents who do not consider themselves Baltimore natives, 57% follow the Triple Crown and have the most interest in the Preakness (50%).

For non-Baltimore natives, watching the races is the most enjoyed activity at the Preakness, followed by the infield entertainment and festivities (25%), and people watching (21%).

Too crowded (36%), the infield atmosphere (27%), and not interested in horse racing (24%) emerge as the top reasons for not attending Preakness.

Categories: Market Research and Uncategorized | Tags: Preakness
This entry was posted on Wednesday, May 6th, 2015 at 5:44 pm. Both comments and pings are currently closed.