Two weeks ago we discussed what focus groups are and how they relate to qualitative market research. This week we’ll look at the differences between focus groups and in-depth interviews and when to use one or the other. 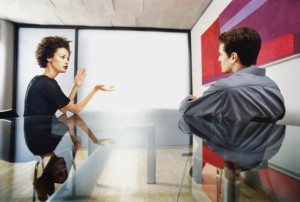 Focus groups are used to conduct qualitative market research. A group of participants, usually no more than ten, are recruited to attend a focus group. Their recruitment is contingent on parameters that are relevant to the research being performed. For example, a supermarket chain wishing to know how it can improve its shopping experience will seek to recruit participants who shop extensively at their chain. The session takes place at a facility that serves as a venue for the focus group, which on average lasts between one and two hours. A moderator guides a group discussion about the shopping experience at this chain, and how the group would like to see it improved. Researchers from the supermarket chain observe this conversation and use the results to make improvements.

In-depth interviews (also known as IDIs) are also used to conduct qualitative market research, but they differ from focus groups in that there is no group. Instead, interviews are conducted one-on-one, many times (but by no means exclusively) with industry professionals whose body of knowledge in the industry allows them to give more detailed responses to the questions asked. The fact that there is only one participant also allows that participant more time to speak, as opposed to a focus group where participants have to share the time allotted.

There are pros and cons to both focus groups and IDIs. When it comes to deciding which technique to use, the goals of the research have to be taken into consideration. IDIs are best used in situations where the goal of the research is to get feedback on isolated user experiences. For example, researchers who want to know how people feel about a smartphone’s usability can use an IDI to get detailed individual responses, which are relevant because using a smartphone is an individual activity. IDI’s are also preferable in situations where researchers are interested in a sensitive subject, such as serious illnesses, that people might not be comfortable sharing in front of a group.

Using a focus group allows the moderator to encourage conversation, which can lead to a feedback effect among the group that spurs further conversation that might not have come up in an IDI. Essentially, the moderator can get the ball rolling, and the participants get to kick it around and bounce ideas off of each other. Another benefit of focus groups is that the researchers are able to observe this conversation both live and recorded.

Overall, both focus groups and IDIs have their place in the qualitative market research process. Focus groups are useful for initial research because they harness the power of group dynamics to spur conversation and discovery about a broad topic. IDIs are useful later on in the process when getting down to the nitty gritty. Going back to the smartphone example, a focus group could be used to determine what features users would like to see in a new smartphone, while IDIs could be used to determine how users responded to a prototypical user interface on the phone. Whether it’s IDIs or focus groups, Observation Baltimore can provide recruiting and facility rental services.

Learn more about the research facility Observation Baltimore: call us at 410-332-0400 or click here! If you’d like to participate in one of our focus groups, sign up at www.observationbaltimore.com/getpaid.