Venice, Hong Kong, Lisbon, Baltimore. What do all of these cities have in common? They were all named as some of the best waterfront cities in the world in a recent Huffington Post article. Baltimore holds its own among this lofty company, and is one of only three cities from the U.S. to make the list, including New Orleans and San Francisco. Rich in a unique blend of history and attractions, Baltimore is a hidden gem among east coast cities. Here are a few reasons why.

Attractions along Baltimore’s waterfront are in no short supply, starting with what many consider to be the city’s crown jewel, the Inner Harbor. Once a hotbed of shipping and industrial activity, the Inner Harbor underwent an extensive renovation to become one of the most beautiful public spaces in the city. The Inner Harbor features plenty of shopping and restaurant options, as well as historical attractions such as the sloop-of-war USS Constellation, built in 1854. Framing the south side of the harbor is Federal Hill, which offers a sweeping view of Baltimore’s skyline. Scan the harbor for the Pratt Street Power Plant, a vestige of the harbor’s industrial past now occupied by Phillips Seafood and the Hard Rock Cafe, among other tenants. Next door, check out Baltimore’s National Aquarium, housing more than 17,000 specimens and a tropical rain forest exhibit visible from the outside through a sheer glass facade.

Like the Inner Harbor, these two neighborhoods were once home to industry and shipping that is now found in the Port of Baltimore, located in Point Breeze. Fells Point and Canton have become two of the most popular destinations in the city for shopping, cuisine, and nightlife. The neighborhoods are also home to a vibrant, young urban population which is driving growth in the city. There is also no shortage of public waterfront space here, with Fells Point’s Broadway Pier and Canton’s Waterfront Promenade and Waterfront Park, the latter of which now hosts WTMD’s monthly First Thursday concert series. After the show, wander up to Canton Square for a two-block radius of bars, restaurants, and nightlife.

Quieter than the busy neighborhoods of Fells Point and Canton, Locust Point is no less a part of the city’s famous waterfront. It may be best known for Fort McHenry, where American forces successfully defended the city from a British warship attack in 1814. Locust Point is also home to one of the most recognizable industrial emblems of the city, the Domino Sugar plant, with its eminent neon red sign. Equally prominent in the industrial sphere of Locust Point is the home of Under Armour, which in less than two decades has become a major player in athletic apparel. The Baltimore Museum of Industry and Visionary Art Museum are two more stops in Locust Point that shouldn’t be missed. 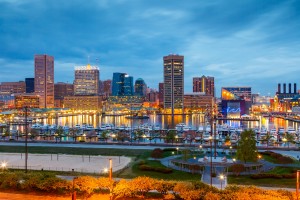 Observation Baltimore pays CASH to individuals who participate in our qualitative studies at our Baltimore research facility. If you want to take part in one of these studies, please:

Categories: All About Baltimore and Uncategorized | Tags: Baltimore, Maryland, and Research
This entry was posted on Wednesday, July 9th, 2014 at 5:57 pm. Both comments and pings are currently closed.